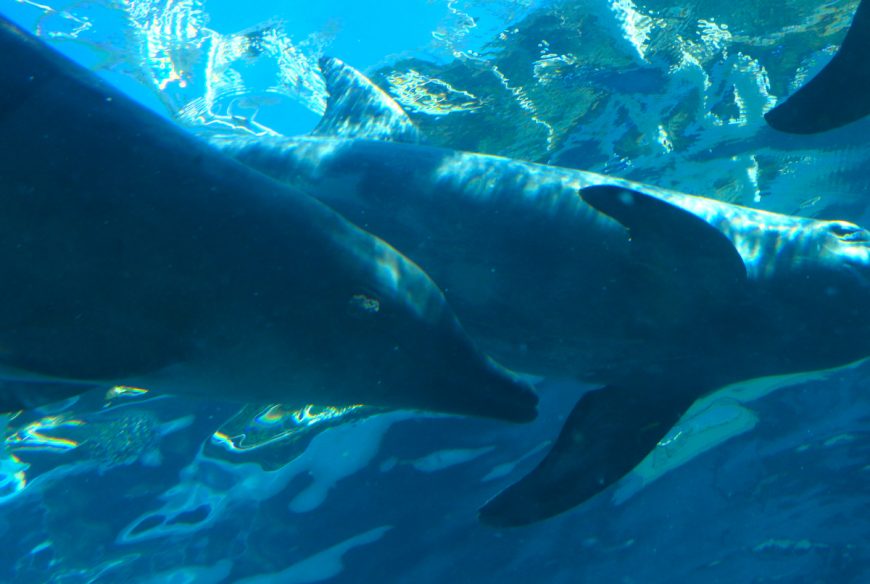 Following the typhoons and tropical storms that have hit Taiji over the last few weeks, Dolphin Project Cove Monitors decided to check on the well-being of the captive dolphins held at the Taiji Whale Museum.

As we walked in, we noticed a new exhibit on the ground floor celebrating 50 years since the museum opened. The display contained pictures and dates of select deceased dolphins that had been in their care over the years, some of them only surviving for as little as nine months. It was surprising that they chose to share such short lifespans of these mammals as part of their celebration.

Every dolphin on display at the museum, past and present, was brutally captured in the Cove. They were chased into shallow waters, manhandled, harassed and inspected, then deemed young and/or pretty enough to be strapped into a sling and dumped into a pen or a tank for human gratification, torn away from their families who would usually remain together for life. The rest of the pod would have either been left to cope in the wild with family members missing, or mercilessly slaughtered once the captive selection process was over, reduced to slabs of meat and sold in supermarkets. The dolphins of the Taiji Whale Museum endured so much suffering before they even arrived, and their struggle hasn’t ended. 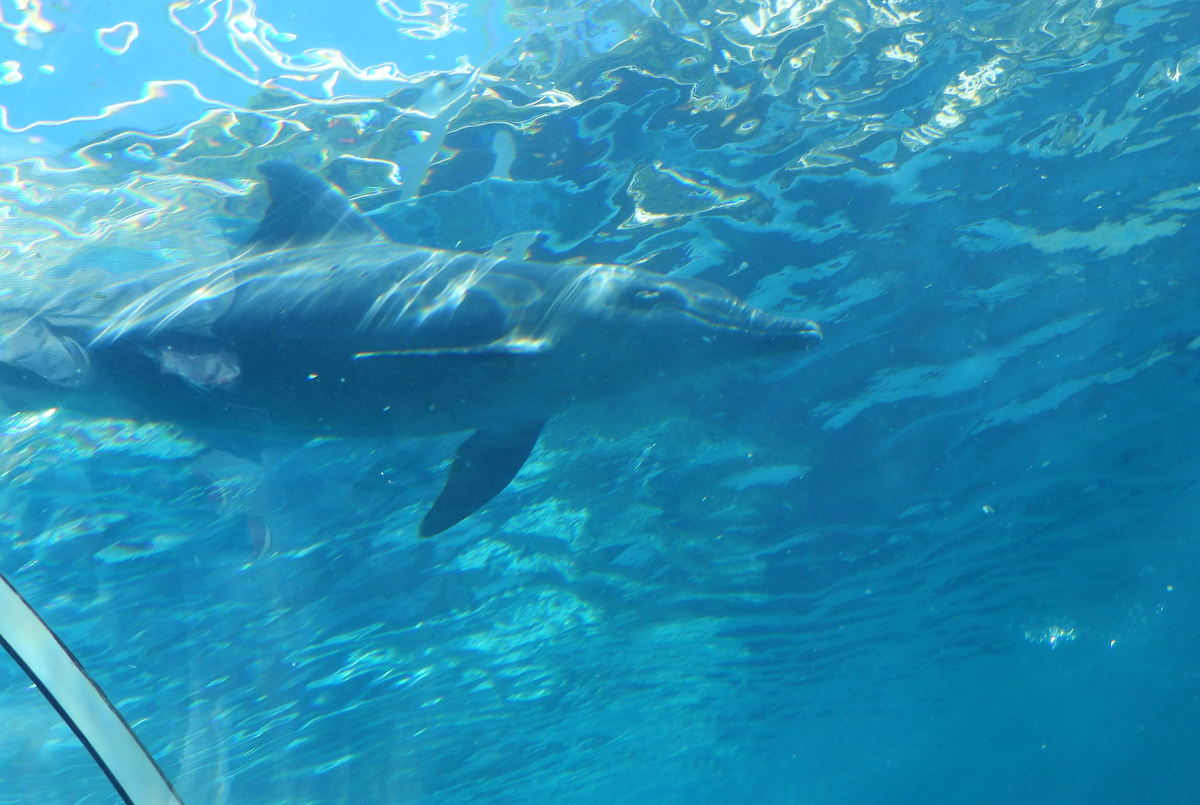 The dolphins are forced to form artificial pods, often containing a number of different species. Just a few weeks ago, four rough-toothed dolphins were taken captive after being driven into the Cove with the rest of their pod. They now reside in the Marinarium – a small, fully-enclosed tank that gets no sunlight, complete with a walk-through tunnel that greatly reduces the swimming area available to the dolphins. This is also the tank where Angel resides, a true albino bottlenose dolphin captured in January 2014, along with two striped dolphins and one pantropical spotted dolphin.

Cove Monitors witnessed the rough-toothed dolphins swimming closely to each other in the shallow tank, vocalizing and communicating constantly. One repeatedly slapped the surface of the water with either its tail fluke or its entire body. There was a visible skin lesion around one of the dolphin’s eyes. Watching them swim in endless circles, their new environment seems so drastically inadequate, and unfair for these sentient, free-ranging mammals.

The Pacific white-sided dolphins in the main show tank appeared equally unhappy. Repeatedly, they breached (jumped) on top of one another and mouthed at each other’s flukes. In captivity, there is no escape or respite for dolphins during conflict. They are trapped, and when the show is over and visitors get to go home, the dolphins do not, having to relive the same routine day after day. 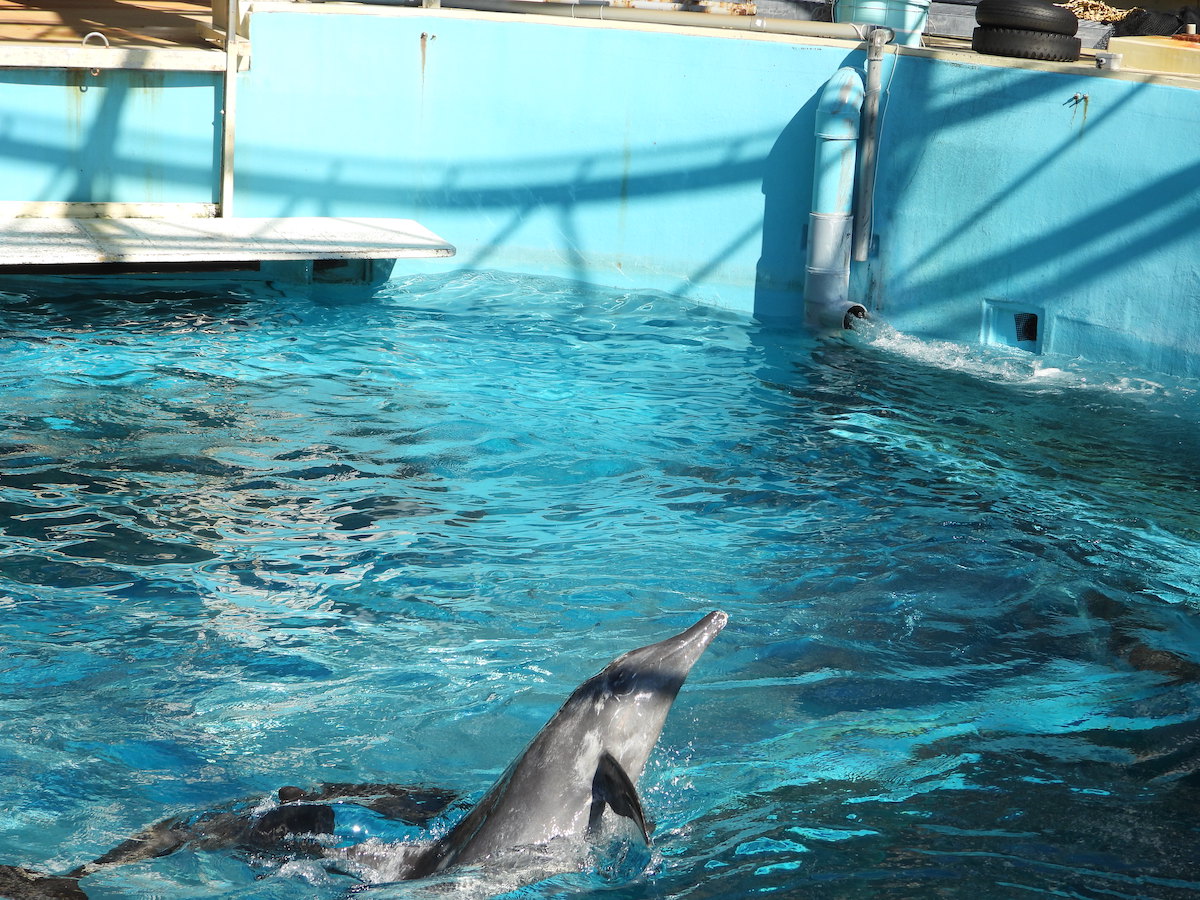 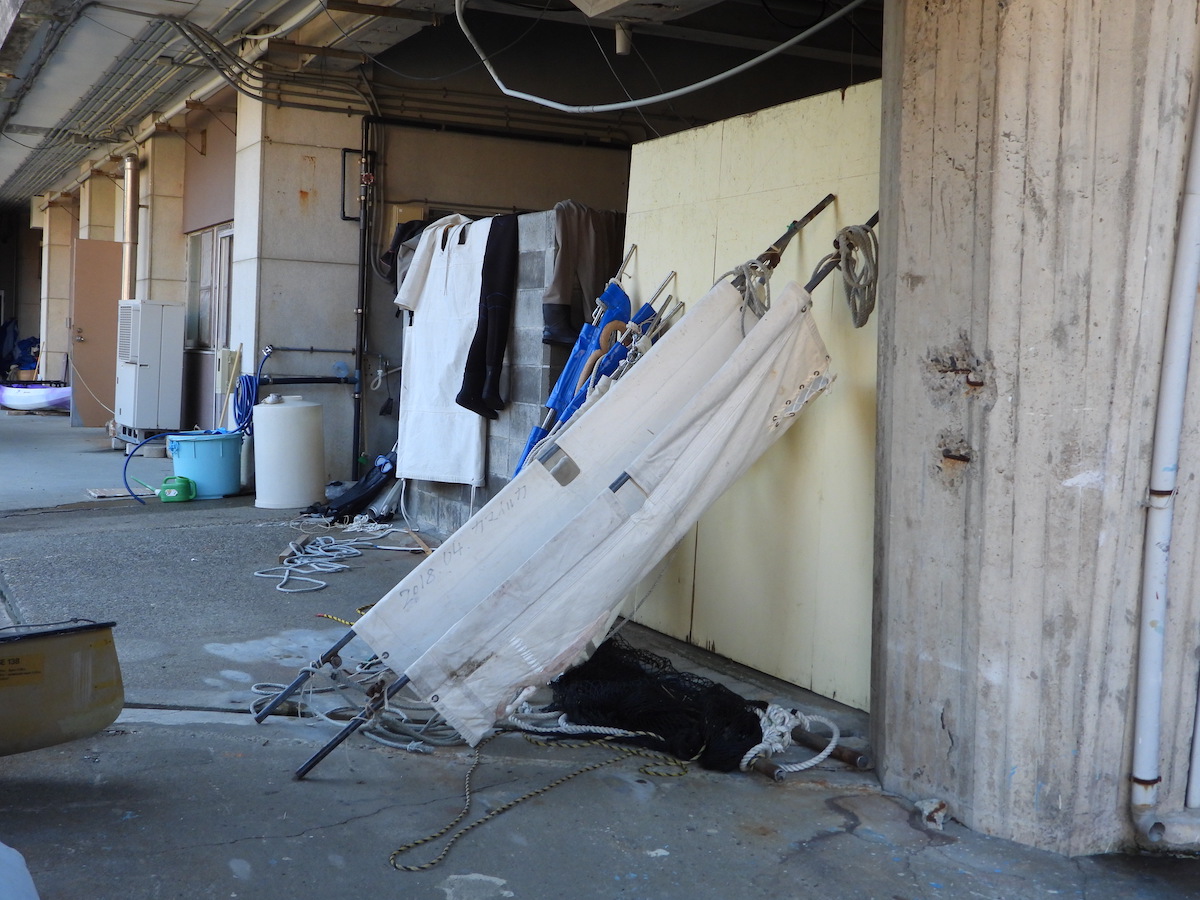 One experience that visitors can participate in at Taiji Whale Museum is kayaking around the lagoon with some of the larger dolphins: a false killer whale and two Risso’s dolphins. The dolphins are accustomed to these kayaks, and are aware that their participation equals being fed. At one point, Cove Monitors witnessed the false killer whale lunging at the kayakers. A trainer beckoned him over to the side where she then instructed him to ‘high five’ her and squawk at her in return for food. 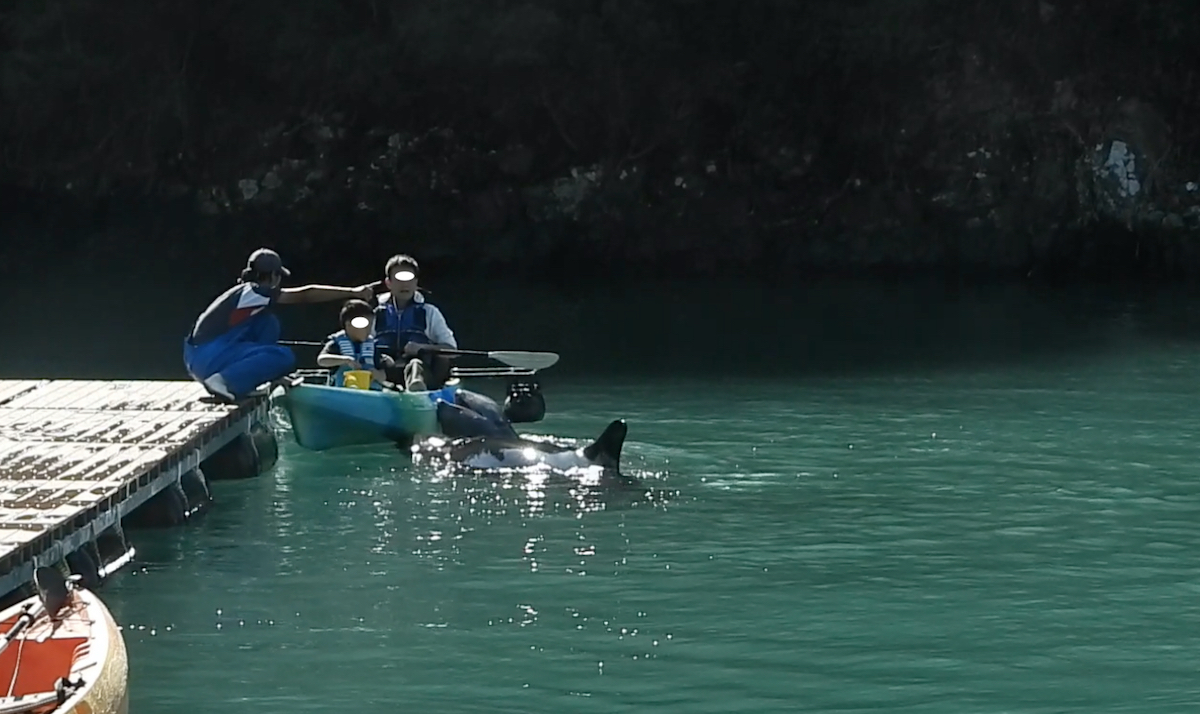 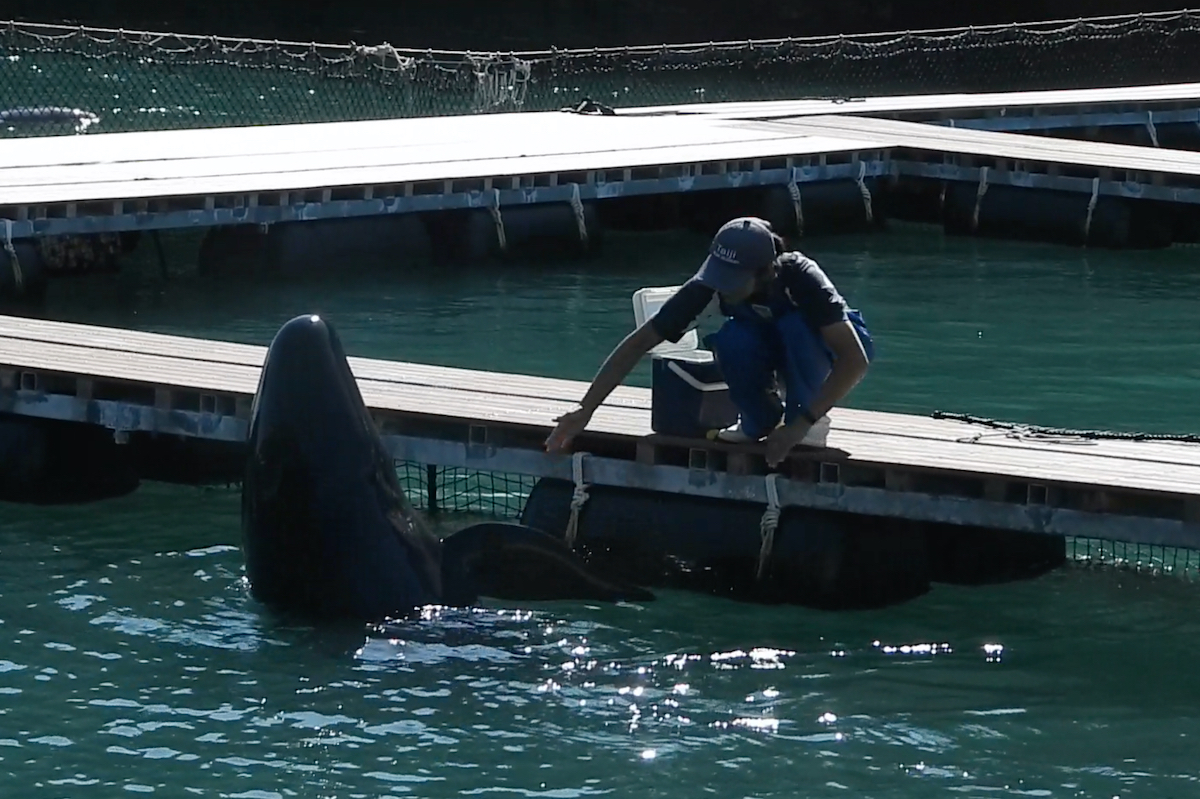 There have been many consecutive ‘Blue Cove’ days recently, where no dolphins have been captured or slaughtered, but we will continue documenting the captive dolphins’ hardships in effort to spread awareness and encourage others to not support this profitable industry – a business that costs these mammals their freedom. Please say NO to the dolphin show! 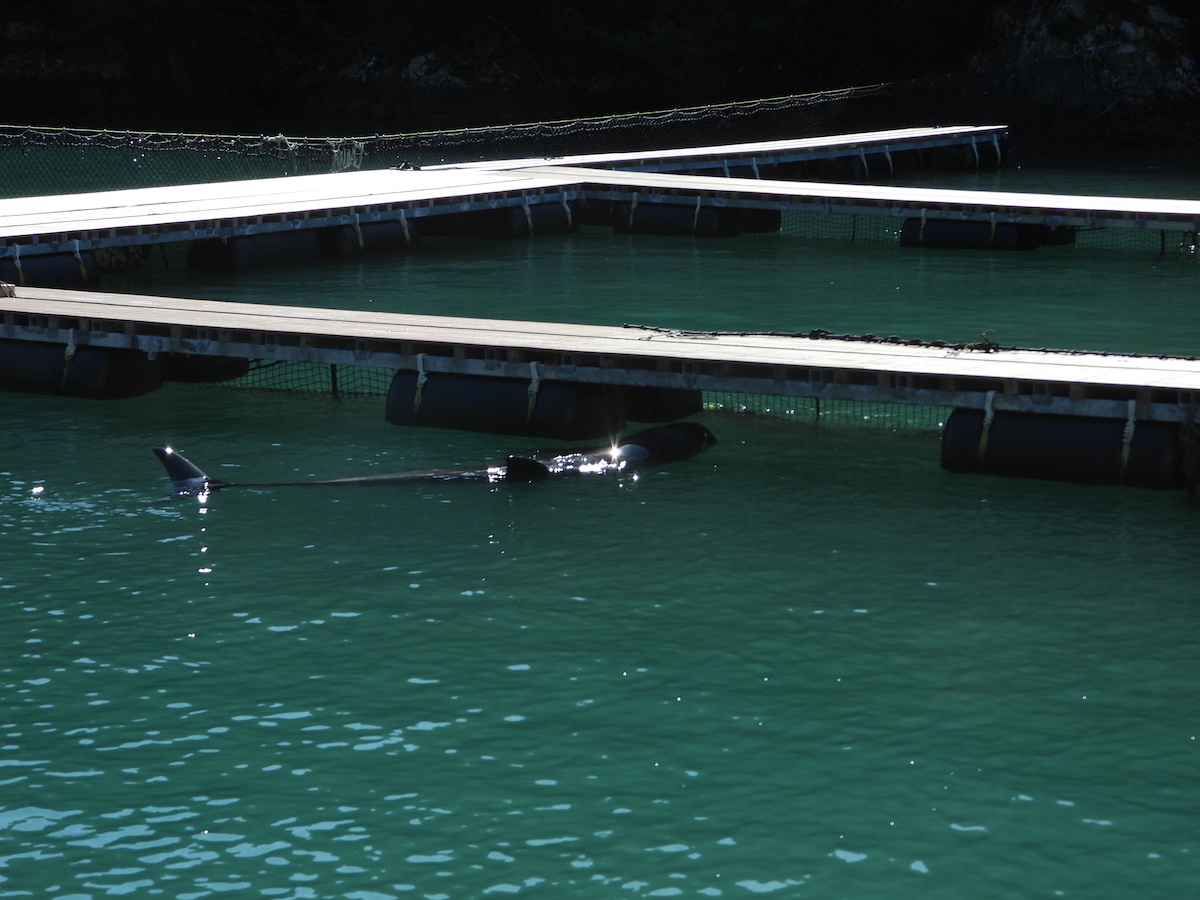 For a species used to living their lives in family pods, captivity couldn’t be any more unnatural or unhealthy, Taiji Whale Museum, Japan. Credit: DolphinProject.com 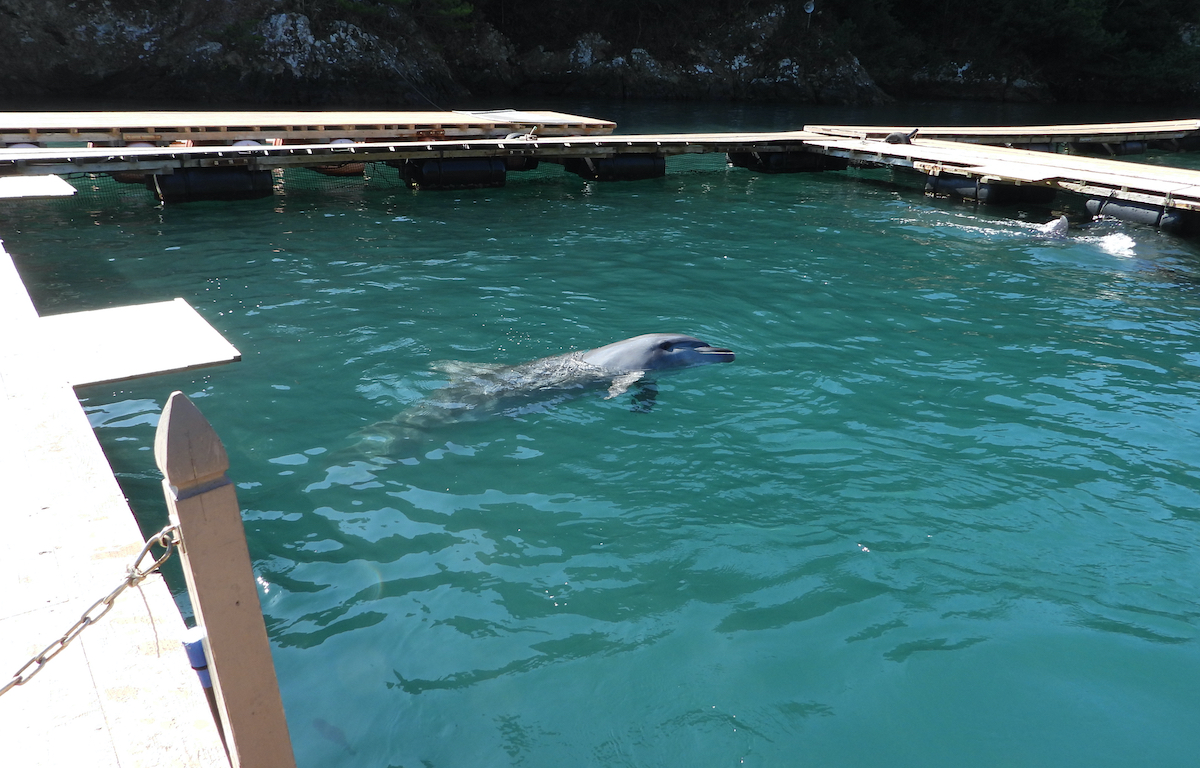 “Life” in captivity is no life at all, Taiji Whale Museum, Japan. Credit: DolphinProject.com

Take Action for dolphins by clicking the banner below.