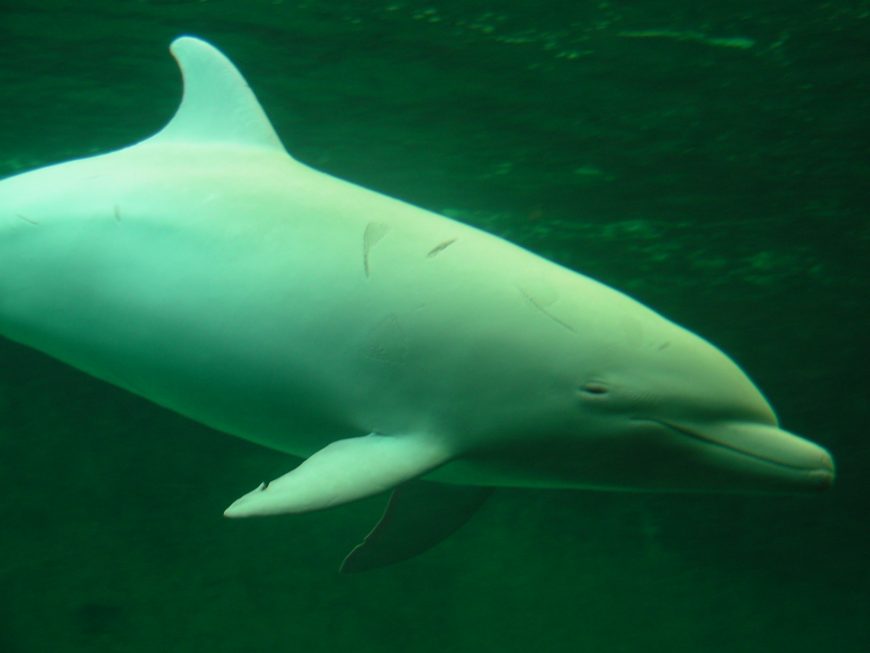 I have a very sad video to show you.  After the white albino female we’ve named Angel was caught in the Cove in Taiji and transferred to an outdoor tank in the Taiji Whale Museum, we have been trying to get in to see her.

Our volunteer Cove Monitor, Karla Sanjur, was last week denied entry to the Museum as the slaughter in the Cove continued.  This has happened to us many times before, where the Museum management refuses entry to us because of our opposition to the dolphin hunts.  They can be very selective in which restrictions they enforce on us at the Museum, which is owned by the Taiji town government.  Sometimes they refuse to allow us to take photos.  Other times, they will refuse us entry.

But Karla, like so many of our fine volunteers who serve as the defenders of the dolphins in Taiji, was persistent.  She finally got inside the Museum this past weekend and took this video of Angel in her tank.

Something is terribly wrong here.  Angel is still a baby, and still needs the protection of her mother and her dolphin pod.  Only her mother and the pod were wiped out by the dolphin hunters.  I believe, based on video I’ve seen, that Angel’s mother committed suicide due to the stress of her capture and the separation from her baby Angel.  Angel’s other relatives were largely slaughtered for meat.

In the video, what is most striking is that, as dependent as she is, she is not swimming with the other dolphins in the tank.  It is likely these other dolphins have been in the tank for a while from a previous capture and are not from Angel’s pod.  They too are under a lot of stress.

Angel needs to be cared for and protected, so the fact that she is still alone after a week in her new prison does not bode well.  The Taiji dolphin hunters and the Taiji Whale Museum could have brought Angel’s mother into captivity with her – that would have increased her chances of surviving the trauma of the capture.

As I said at the beginning, this is one sad video of a very sad dolphin.  It really breaks my heart.

Please:  Don’t buy a ticket to a dolphinarium!  As long as marine parks make money off of captive dolphins, belugas and orcas, these scenes in Taiji, a major supplier of captives along with Russia and Cuba, will continue.

Our colleagues at the Elsa Nature Conservancy of Japan and other Japanese organizations have posted a new petition urging the World Association of Zoos and Aquariums (WAZA) and its Executive Director, Dr. Gerald Dick, to take action against the Japan Association of Zoos and Aquariums and the aquariums, like the Taiji Whale Museum, that continue to subsidize the dolphin slaughter by paying top dollar to pick out the few show-quality dolphins while the rest of the family is slaughtered in a welter of blood for meat.

Photo and video by Karla Sanjur/DolphinProject.com