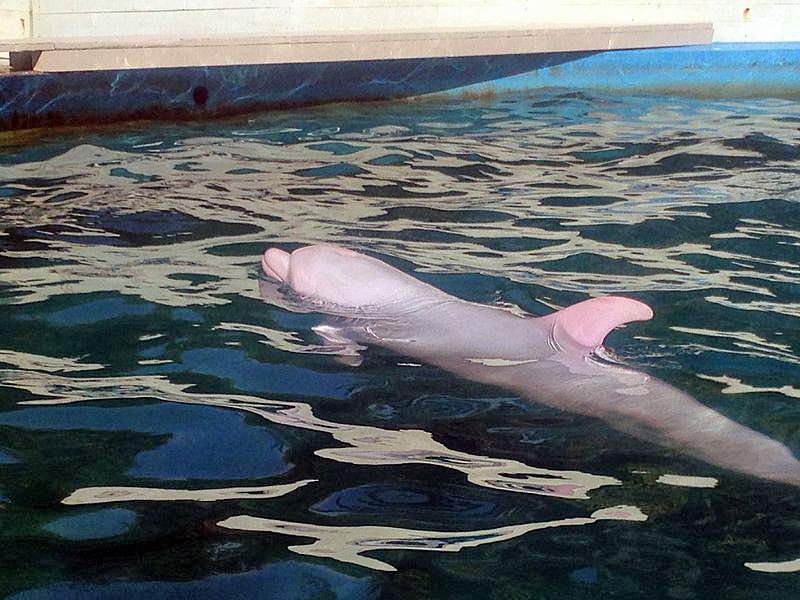 On January 17th a pod of approximately 250 bottlenose dolphins were driven into the Cove.  Amongst them was a beautiful, extremely rare albino calf.  My dear friend and fellow volunteer Cove Monitor Karla Sanjur was in Taiji, documenting the drive hunt, and immediately noticed this little white dolphin.  She said it “looked like an angel with fins”, and so Ric O’Barry and Karla aptly named this baby ‘Angel’.

After spending a terrified night in the Cove, Angel was forcefully ripped from her mother’s side and, as predicted, was taken to the infamous Taiji Whale Museum.

Angel is a very special little dolphin. Her genetic defect makes her unique, and she has caught the attention of the world, bringing more light to the direct link between the captivity industry and the dolphin slaughter in Taiji.

I have found it extremely difficult to check on Angel because the Taiji Whale Museum has been denying entry to most Westerners.  The first few times, I was told that “Anti-Whalers” were not allowed.  After repeatedly insisting that I was a tourist, their reasoning changed to “No tourists” allowed.  An aquarium that doesn’t allow tourists… Interesting!  After many days of this I was finally allowed inside – however, the only camera I was able to bring was my iPhone.

Angel shares her small tank with one larger bottlenose dolphin.  During my the time of my observations, Angel swam in a very small circle in the center of the tank, surfacing for a breath every 20 seconds or so, in the same spot during each lap she made.  After a few breaths, it became obvious how predictable and repetitive her actions were.  She did not interact with the other dolphin, although the other dolphin just floated lifelessly on the surface.  Despite their forced close proximity to one another, they acted as though they were unaware of each other’s existence.  Her eyes remain closed or partially closed.

The dolphin “show” began in the neighboring section of the pool.  Music and narration were blasted through a loudspeaker located next to Angel’s tank.  Her behavior did not change.  After the show, a trainer came to feed Angel.  He extended his arm and offered dead fish to her, slapping it on the water.  She took immediate interest.  She was hungry; she wanted the fish, but it was apparent how terrified she was of humans.  She cautiously approached, and each time she grabbed the fish she spun around in a splash and retreated to the center of the tank.

Her evident fear should come as no surprise.  After all, humans are the ones who hunted and chased her family and stole her from her mother.  Of course she’s terrified.

Angel was born a wild dolphin, belonging only to her mother, her family pod, and the sea.  That’s the life that she and every other dolphin were meant to live.

Do not support the captivity industry.  As long as aquariums continue to sell tickets, they will continue to buy dolphins, and pods like Angel’s will be driven into the Cove and either enslaved or slaughtered.  Do not support the continued imprisonment of Angel and countless others who have lost their family and freedom in the Cove.  Be a voice for Angel.  Say no to the dolphin show.

Contact the World Association of Zoos and Aquariums (WAZA) to urge them to be responsible and take action against their members that source dolphins from Taiji and other wild dolphin capture sites (like Russia and Cuba).

Photos and Video of Angel in Taiji Whale Museum by Heather Hill/DolphinProject.com