Anatomy of a Slaughter: In Photos

Home/Blog/Campaigns/Japan/Anatomy of a Slaughter: In Photos 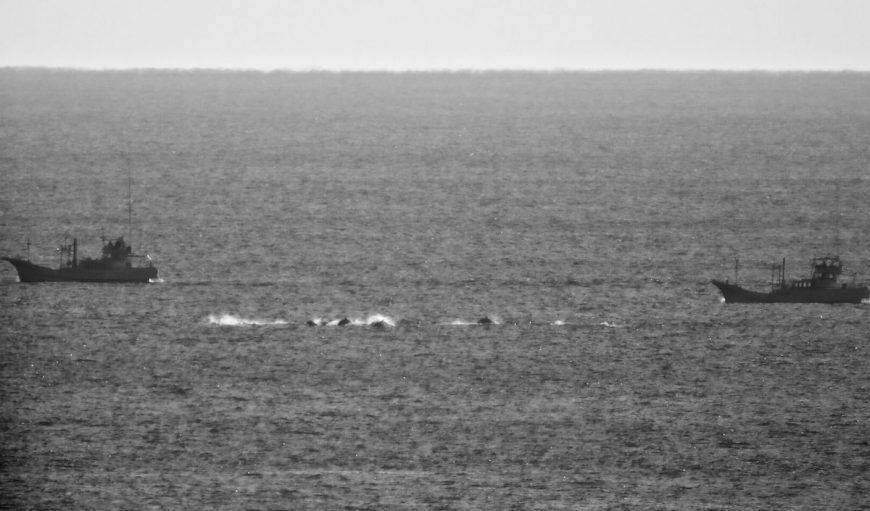 Taiji, Japan: When the dreaded black smoke from hunting boats appears on the horizon, and the chilling sounds of fishermen banging on poles echo through the air, Dolphin Project Cove Monitors know an innocent pod of dolphins are being pursued. Sometimes, it’s for captive selection, when (select) dolphins are taken and shipped to marine parks and aquariums throughout the world for “life” as entertainers. Other times, it’s for slaughter. No matter the reason, the lives of these free-ranging mammals of the sea are irrevocably ravaged. And for what, you might ask? Money. In the case of captivity, A LOT of money, upwards of $155K USD per dolphin.

But this wasn’t the case today, when an unsuspecting pod of approximately 35-40 striped dolphins were driven into the cove. They weren’t earmarked for performances; they were destined to die. And they were going to lose their lives within hours.

While their deaths were reason enough to be outraged, what took place between their capture and their slaughter was downright heartrending. Dolphins were caught on our cameras panicking – both physically and in their frenzied vocalizations – as they struggled to escape the hunters and stay alive. Tragically, this wasn’t to be.

The following photos depict some of the last moments of these dolphins’ lives. At the end of this blog is a link to TAKE ACTION. Your voice counts! Let Japan and the rest of the world know that ENOUGH IS ENOUGH. Together, we WILL end this madness.

The hunt ~ the sea is beat to a froth as a pod of dolphins attempts to evade the aggressive hunting boats.

Exhausted, the pod are moments away from being trapped in the cove as nets are laid down, preventing escape.

Fate is sealed for pod as they are netted (and trapped) in the cove.
Credit: DolphinProject.com

One dolphin attempting escape gets caught underneath the nets.

Terrified and terrorized: Dolphins begin popping their heads out of the water, and find themselves staring into the eyes of their killers.

Staring into the eyes of killers.
Credit: DolphinProject.com

Another panicked dolphin throws itself onto the nets. This time, a diver pushes the mammal back.

Diver pushes another panicked dolphin off the nets.
Credit: DolphinProject.com

The hunts themselves are deadly: Numerous injuries cover the face of a dolphin as the panic in the cove continues.

Dolphin is covered in numerous injuries prior to slaughter.
Credit: DolphinProject.com

Fishermen/hunters look on as blood pours from the rostrum of a dolphin.

Blood pours from dolphin’s rostrum prior to slaughter as fishermen/hunters look on.
Credit: DolphinProject.com

Drowned alive: Wrapped by its flukes, a dolphin is dragged towards the shallow waters, where it will be slaughtered under tarps.

Roped by the flukes and drowned – alive.
Credit: DolphinProject.com

The bloody waters of the cove are all that remain of this beautiful pod of striped dolphins.

The Cove runs red from the blood of the dead. And another pod is no more.
Credit: DolphinProject.com