An Angel in Hell 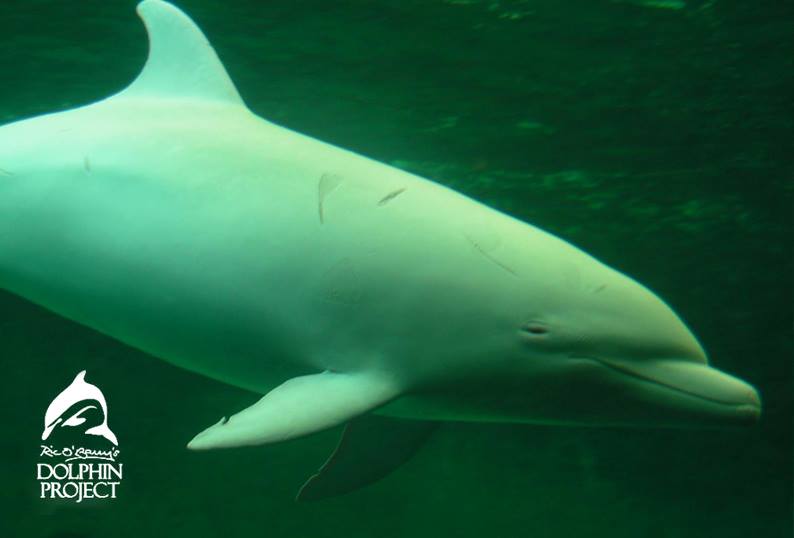 I was able to enter the infamous Taiji Whale Museum in a disguise to inspect the albino dolphin known as Angel.  I had to disguise myself as a Japanese tourist, because Westerners are not allowed in the Taiji Whale Museum.  This is a blatant violation of Article 21 of the Japanese constitution.  American tourists should not have to wear a disguise in order to inspect an albino dolphin which is on public display in a public facility.  Article 21 is routinely violated in Taiji.

Ric in his guise as a typical Japanese tourist, as the Taiji Whale Museum has been refusing access to Westerners.  Photo by Ric O’Barry.

Here’s my first impression having studied her for only a few hours today:

Her weight seems normal.  There are no rake marks on her body, but there are dark patches on both sides of her body in the middle section below the dorsal fin.  These look like bruises.  This may be the result of rough handling during capture.

Angel is being hand fed dead fish at the surface of the water.  This is a good thing, because she does not have to compete with her tank-mates for fish thrown into the water.  I was relieved to see her eating.  Early reports from Taiji said she was not eating well.  Sometimes not eating is the first and only sign of sickness or disease.

The smell of chlorine is strong in the building.  This may be why she keeps her eyes closed much of the time.  We have been told she is blind and deaf, but judging from her movements in the tank, she seems to have her sight.  No way to know about her hearing ability at this point.  I will try some simple tests if I can get back in the facility later on.

She is surviving in a tiny overcrowded tank with five other animals.  Four of them are striped dolphins (Stenella coeruleoalba), and one is a Pantropical spotted dolphin (Stenella attenuata).  All were caught in the Taiji drive hunts, so all of these animals, including Angel, have a high level of stress, having lost their freedom and their pod-mates.

The tank has a large plexiglass or acrylic tube running through it.  The tube is a walkway for the tourists.  The tube takes up a great deal of space in the small tank making even smaller.  It’s a bad idea.  This tank is designed with the paying customers in mind – not the dolphins.

Angel in her small tank at the Taiji Whale Museum — the walk-through tunnel takes up most of the space.  Photo by Ric O’Barry.

At first glance, it would appear that Angel is socializing well with the others, but after sustained observation, it becomes obvious that she is constantly harassed and bullied by two male striped dolphin.  This can be seen in the video I took posted below.  She never initiates contact with any of the others.  She seems to try to avoid them, but that is almost impossible in the small space she is forced to live in.

She can’t seem to find any peace in this abusive environment.  There is no place she can go to get away from the two males.  No place to hide.  In the ocean, dolphins and other marine mammals can run away from a bad situation.  It’s yet another reason that captivity for dolphins simply does not work.  The captive industry has been trying to control the social dynamics of captive dolphins since 1938 without success.  It’s a failed experiment.

We must keep in mind that Angel is no more or less important than all of the other dolphins at the Taiji Whale Museum.  She is valuable because she is a pure white albino, and she stands out in the crowd.

Angel has won the hearts of millions of people who know her sad story.  She has become the symbol for the hundreds of thousands of dolphins who have been captured or slaughtered in the Cove here in Taiji.  We need to keep her story alive, even if we don’t succeed in keeping her alive.

Please send a letter to Prime Minister Shinzo Abe of Japan asking him to help us help Angel and get her into a better situation and to end the dolphin hunts in Taiji permanently.

I thank you all for your support.  You help make my travel and our Dolphin Project Team expert work possible.  Many of you volunteer to help, write letters, tell your friends, and go to demonstrations for dolphins and whales.  I’m grateful for it.

Let us hope we can give Angel better days ahead.

Video and Photos by Ric O’Barry.