ALERT: Help Shut Down the Smallest Dolphin Tank in the World

Home/Blog/Japan/ALERT: Help Shut Down the Smallest Dolphin Tank in the World
23Jan

While I was in Taiji this past week, I had a chance to visit the notorious Taiji Whale Museum.  This museum is right around the corner from the killing Cove where thousands of dolphins are slaughtered brutally every year.  Outrageously, the Taiji Whale Museum, run by the town of Taiji, helps capture dolphins for the international trade in live dolphins for dolphinariums around the world.  While the Taiji dolphin hunters get around $500 or so for a dead dolphin when sold on the market for meat, the Taiji Whale Museum will get more than $150,000 (and rising) on the international market for a trained live dolphin, and so the Museum actually subsidizes the bloody dolphin drive hunts.

While visiting the Taiji Whale Museum and checking out the tanks, I again encountered one of the worst tanks there – I’m pretty sure it is the smallest dolphin tank in the world.  This tank now plays host to two spotted dolphins that are listless and hang at the surface of the tank as if they were dead.  It is a horrible situation in a horrible facility!

We have nicknamed these two poor dolphins “Sad” and “Lonely.”  They will soon be dead, if their conditions are not improved.  (Ironically, the Japanese label in this tank notes that these two dolphins are of a species that is rare in captivity, because they do not do well in captivity!)

You can help shut down the smallest dolphin tank in the world!

Call or e-mail them NOW!

(1) Demand that the Taiji Whale Museum release the two dolphins (Sad and Lonely) back into the wild and close down the smallest dolphin tank in the world permanently.

(2) Ensure that, at a minimum, the Museum moves Sad and Lonely to the bigger sea pens and close down their small tank permanently.

(3) If Taiji Whale Museum refuses to take action, WAZA should expel them along with any other aquariums violating WAZA’s stated opposition to the dolphin drive hunts and their code of ethics for captive cetaceans.

The Taiji Whale Museum does not need to keep Sad and Lonely in this tank, nor should WAZA be certifying aquariums that grossly violated WAZA’s stated opposition to the Taiji dolphin drive hunts and their ethical standards for dolphin tanks.

WAZA should shut down the smallest dolphin tank in the world!  It is about time they show that they are being responsible for the animals that they keep.

Please spread the word to your friends and family.  Thank you for your efforts on behalf of Sad and Lonely! 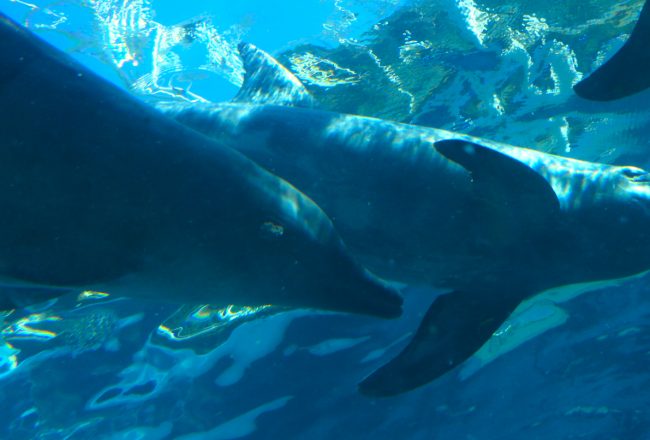