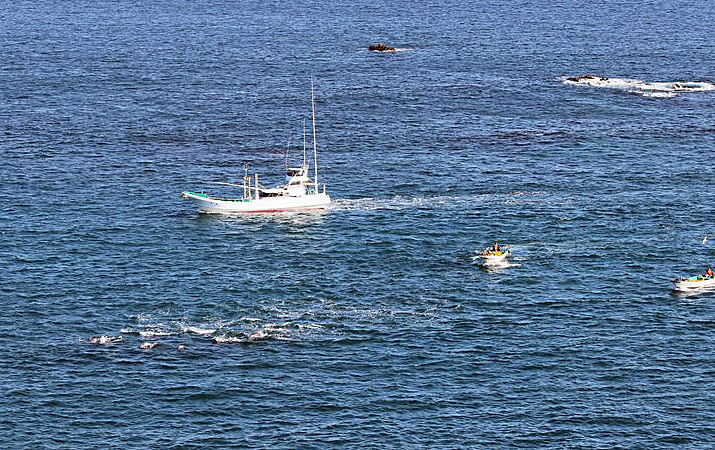 (We have a new volunteer Cove Monitor, Karla Sanjur, who is a graphic artist and a web designer.  But today, she is in Taiji, letting the world know what is going on in the Cove.  She witnessed a huge pod of bottlenose dolphins being captured, including a beautiful and rare albino dolphin calf, likely to spend the rest of its life as a curiosity in the Taiji Whale Museum.  Based on Karla’s comment, I would like to name the albino baby dolphin “Angel”.  Tomorrow, the sorting of the dolphins will commence with the captivity industry – some will be chosen for captivity (mostly tractable females without blemishes).  The rest will be slaughtered for meat.  We want to thank Karla and all of our Cove Monitors for their efforts to protect dolphins and stop the hunts! – Ric O’Barry)

Today, all 12 hunting boats went out at about 6:40 AM.  The ocean was flat, and there was zero wind.  Perfect day for them; terrible day for the dolphins.  I went up to the look-out point to see in which directions the hunters headed and to wait to see if they returned with a pod.  As time went by, I really thought we might have a Blue Cove day because they were out at sea for a very long time and didn’t seem to be in any formation.  That changed at 10:20 AM when I saw a pod of bottlenose dolphins being chased by two of the banger boats.

It seemed to be a small pod, and there was some confusion as to why only two boats were chasing this one pod while the others remained at sea.  After a while, the reason was obvious: While the two boats chased one pod into the cove, five boats were chasing another pod, and the rest remained in the horizon.  The first pod put up a fight, but was driven into the killing Cove in the end.  The second pod of dolphins was divided into two smaller pods, and one of them was driven into the Cove pretty quickly.  The hunters removed the separating nets and joined pod #1 and pod #2 while pod #3 kept fighting for their freedom.  I immediately noticed that there was a very rare baby albino bottlenose dolphin in this now merged pod.  He shined under water and was always swimming next to his mother.  He looked like an angel with fins.

A rare albino dolphin calf with its mother in the Cove.  Photo by Karla Sanjur.

After about half-an-hour, pod #3 was driven into the Cove, and it seemed as though the day might finally be over.  Wrong again.  The remaining boats were chasing two more pods of dolphins.  There is a chance these might have been one huge family that got separated while trying to escape and ended up in five smaller pods, but I don’t know for sure.  Pod #4 and #5 put up a fight as well.  They were driven all the way to the marina and gave the banger boats a hard time.  Unfortunately, in the end, the banger boats merged both pods around the marina and drove them in as one into the Cove.  It is one of the biggest drives in Taiji history (according to some experienced volunteers here).

A large banger boat and two skiffs herd dolphins into the killing Cove in Taiji.  Photo by Karla Sanjur.

Tomorrow when the sun comes out, entire families will be separated.  Some will become slaves and live a captive life while others might be slaughtered right next to their relatives.  This is the real side of the captivity industry.  This is what paying to see dolphin shows or to swim with dolphins pays for.

Skiffs surround the dolphins and keep them captive with nets in Taiji.  Photo by Karla Sanjur.