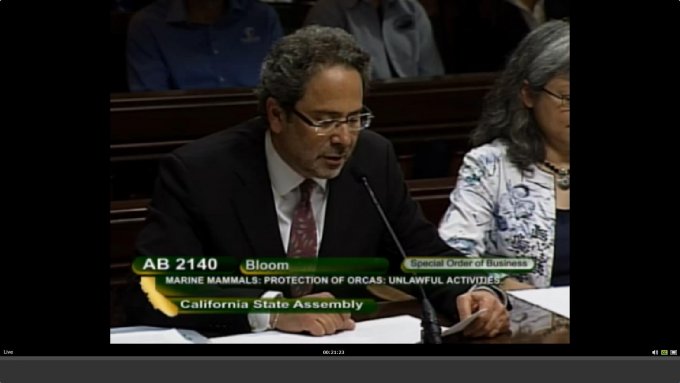 (1) Existing law makes it unlawful to take any marine mammal, as defined, except as provided under specified federal laws.

This bill would make it unlawful to hold in captivity, or use, a wild-caught or captive-bred orca, as defined, for performance or entertainment purposes, as defined, to capture in state waters, or import from another state, any orca intended to be used for performance or entertainment purposes, to breed or impregnate an orca in captivity, or to export, collect, or import from another state the semen, other gametes, or embryos of an orca held in captivity for the purpose of artificial insemination, except as provided. The bill would make every person, corporation, or institution that violates those provisions guilty of a misdemeanor punishable by a fine of not more than $100,000 or by imprisonment in a county jail for not more than 6 months, or by both the fine and imprisonment. By creating a new crime, the bill would impose a state-mandated local program.

(2) The California Constitution requires the state to reimburse local agencies and school districts for certain costs mandated by the state. Statutory provisions establish procedures for making that reimbursement.

This bill would provide that no reimbursement is required by this act for a specified reason.

This bill would make nonsubstantive changes to the latter provision.

The people of the State of California do enact as follows:

Section 4502 is added to the Fish and Game Code,

5 (1) Hold in captivity, or use, a wild-caught or captive-bred orca

6 for performance or entertainment purposes.

7 (2) Capture in state waters, or import from another state, any

8 orca intended to be used for performance or entertainment

10 (3) Breed or impregnate an orca in captivity.

11 (4) Export, collect, or import from another state the semen,

12 other gametes, or embryos of an orca held in captivity for the

14 (b) Every person, corporation, or institution that violates

15 subdivision (a) is guilty of a misdemeanor and, upon conviction

16 thereof, shall be punished by a fine of not more than one hundred

18 for not more than six months, or by both the fine and imprisonment.

20 rehabilitation after a rescue or stranding, or for research purposes.

21 However, an orca that is held for rehabilitation or research

P3    1 purposes shall be returned to the wild whenever possible, and, if

2 return to the wild is not possible, the orca shall be held in a sea

5 (2) Orcas held for performance or entertainment purposes prior

7 to the wild where possible, subject to any required state or federal

8 permits. If it is not possible to return these orcas to the wild, as

9 determined by the best available science, then these orcas shall

11 not used for performance or entertainment purposes.

12 (3) Until an appropriate sea pen has been established, captive

13 orcas held in the state may be kept in existing enclosures. Those

14 orcas shall not be exported or used for gametes, or embryos

15 intended for artificial insemination. Where, based on the best

16 available science, it is determined that an orca has the potential

17 to return to the wild under paragraph (2), that orca may be

18 exported from the state to facilitate its rehabilitation in native

19 waters, subject to any required state or federal permits.

20 (d) For purposes of this section, the following terms have the

23 (2) “Performance or entertainment purposes” includes, but is

24 not limited to, any routinely scheduled public exhibition that is

25 characterized by music or other sound effects, choreographed

26 display or training for that display, or unprotected contact between

27 humans and orcas. Holding of an orca is not, by itself, a

31 barrier or distance between the trainer and the orca, unless

34 the sea floor, and attached to the shore.

35 (e)  The provisions of this section are severable. If any provision

36 of this section or its application is held invalid, that invalidity shall

38 without the invalid provision or application.

No reimbursement is required by this act pursuant to

4 for a crime or infraction, within the meaning of Section 17556 of

5 the Government Code, or changes the definition of a crime within

14 pursuant to law. The deputy director shall have those duties

15 assigned, from time to time, by the director, and shall be

16 responsible to the director for the performance of those duties.