A Visit in Taiji with Hope and Faith

Home/Blog/Japan/A Visit in Taiji with Hope and Faith 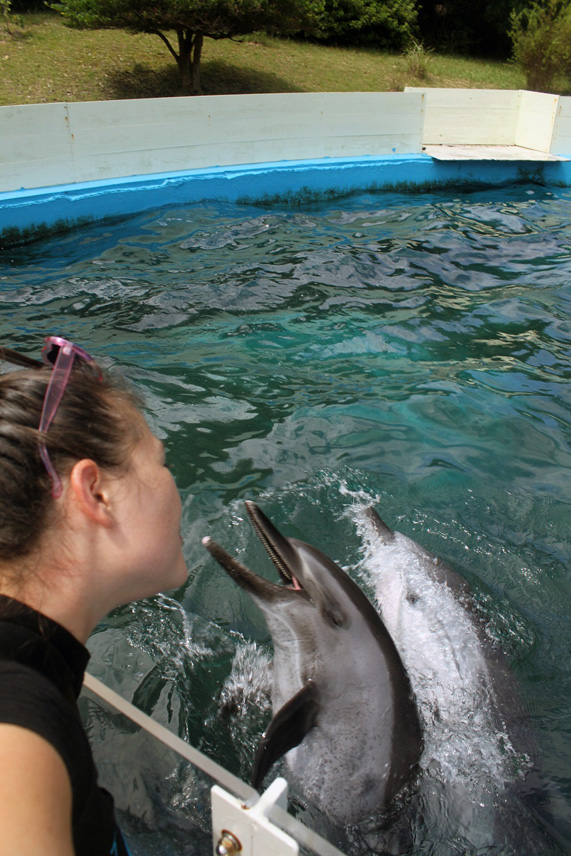 NOTE: Heather Hill, one of our Cove Monitors from last season, went back to Taiji to document and investigate what goes on during the summer.  There she looked up our old friends Faith and Hope (originally nicknamed Sad and Lonely) in their new tank at the Taiji Whale Museum.  — Ric O’Barry

It is less than one month until the annual Dolphin Drive Hunts once again resume in Taiji, Japan.

During these hunts, as you know, pods of dolphins are chased into a small Cove along the coast of Taiji, where they are either brutally slaughtered for their mercury-laden meat or kidnapped from their vast ocean world and sold for large sums of money to aquariums across the globe.  From September 1st through March, the Cove will run red with the blood of these highly intelligent and social beings.  Those allowed to live will be forced to watch and listen as their family members die, before being turned into slaves to the entertainment industry.

So what happens at the Cove in the summer months?  That’s the exact question that has brought me back here.   In July and August, the tarps and “No Trespassing” signs are put away, a few captive dolphins are temporarily moved back into the Cove (separated by nets from the ocean), and tourists are invited into the blue waters to swim amongst them.  This ‘swim-with’ program has been temporarily closed due to a passing typhoon, so I took the opportunity to visit the Taiji Whale Museum and check in on two spotted dolphins nicknamed Hope and Faith.

The Museum had been housing these two dolphins indoors, in the world’s smallest dolphin tank.  Last December I visited this tank, and spent some time playing games with them.  A few months ago they were moved into a larger (though still shockingly small), outdoor tank at the Museum in response to efforts by Dolphin Project and other groups to publicize their plight.  (NOTE:  Heather here includes the fine work done by a number of people on social media, and of course the intervention of mixed-martial arts star Enson, who personally contacted the Taiji City Council to move Sad and Lonely to their new home.  It was not just Dolphin Project, nor was that Heather’s intent to suggest others were not involved. — Ric O’Barry)

Today I approached this tank, anxious to see how they were doing, and what happened next filled my heart with so much joy I thought it was going to burst.  They immediately swam over to me, looked me in the eye, and then exploded with energy.  They were flying high and swimming at speeds they’d not before been able to accomplish.  This continued for several minutes.  It was as if they remembered me, and were showing me how much happier they were now that they had sunlight and a bit of space to really pump their flukes.  Ok, maybe they didn’t remember me, or the shiny gold ‘toy’ I once again held in my hand.  Perhaps they would have reacted that way if any person had approached their tank just then, but either way it was the most amazing and heartwarming moment I’ve ever experienced.  What made it even more amazing was that there were not two, but three extremely energetic dolphins.

Alongside Hope and Faith was the little striped dolphin I grew to love so much last season.  It previously shared that tank with two bottlenose dolphins, and every day I checked on it, it was as lifeless as Hope and Faith had been.  I wish I had the words to describe how transformed these three dolphins seem to be.  They are still captive and living in a concrete tank, but their improvement is definitely something to feel good about.