A Tale of Two Risso’s 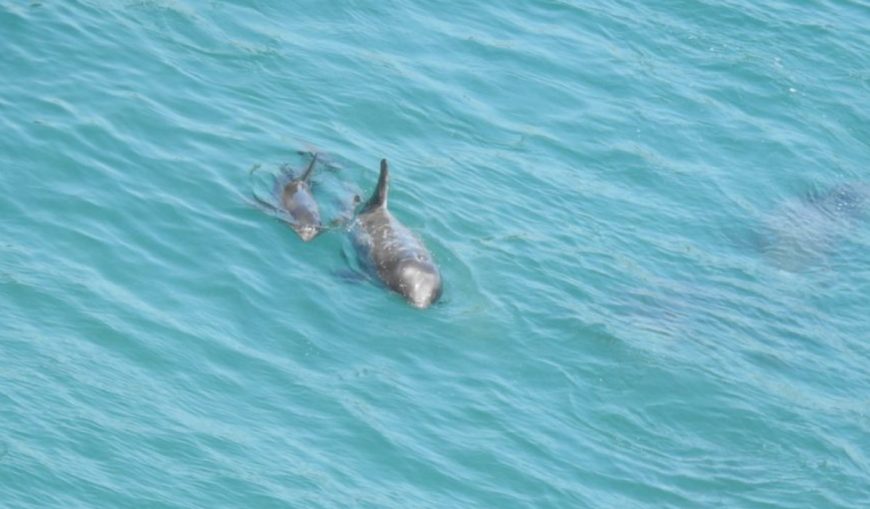 Under the cover of darkness, a squid quietly pulls water into its mantle cavity and forces it out through its siphon. Jet propulsion carries it towards the surface where it will feed on the small fish, crustaceans and even smaller squid that have also traveled upwards to take advantage of the abundant plankton near the surface of the ocean.

Night time is the safest time for squid to make this vertical migration to feed. Thus, shoals of squid make this migration each night as they seek to feed away from the predators that would make them the prey instead of the predators, themselves. However, on this night, as the solitary squid approaches the surface of the ocean, it feels a series of pulses, one after another, and closer and closer together. Suddenly, the squid is snatched by sharp teeth and swallowed whole, having fallen victim to a hungry Risso’s dolphin.

Risso’s dolphins – Grampus griseus – is the only species in the genus Grampus. They are named after naturalist Antoine Risso. An unusual dolphin, Risso’s have between 4-14 teeth, found only on the lower jaw. These sharp teeth are used to grasp their prey, as there is no chewing, or tearing at flesh, just grasping and then swallowing whole. Their upper jaw is toothless. Although their primary food is squid, they will eat other cephalopods as well as fish, using echolocation to locate their prey. Although feeding often takes place at night when prey is closer to the surface, Risso’s dolphins can also dive deep in search of food. A series of shorter dives is usually preferred but they can hold their breath for up to 30 minutes – a skill that comes in handy for those family pods that migrate past the coast of Taiji. 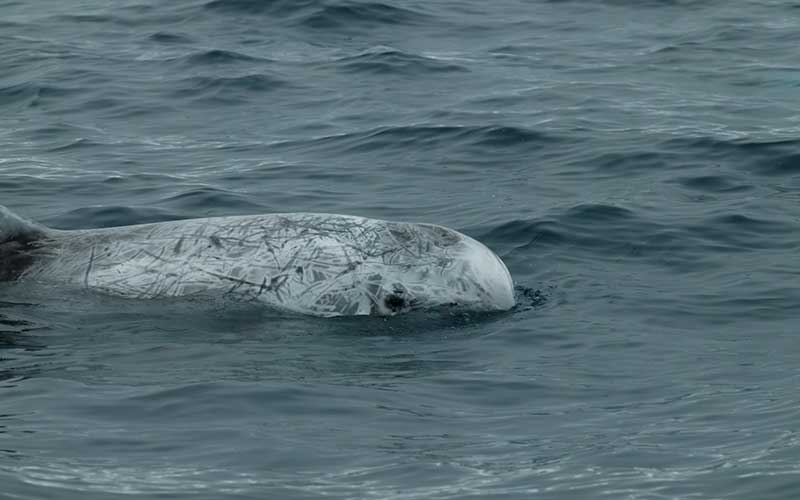 On opposite ends of the same Pacific ocean, two Risso’s dolphins are born, yet their destinies couldn’t be more different.

One calf is born off the California coast in the Pacific Ocean while another is born off the coast of Japan. They are both part of what is known as a nursery pod, a group of dolphins that consists mainly of females and their calves, as well as some elders. These older dolphins are almost white in color, having many scars from years of scuffles with other Risso’s and altercations with the hard beaks of squid. The group works cooperatively to ensure everyone has time to feed. Adult females will look after the calves of other females, giving the mothers a chance to go hunt for themselves.

Risso’s dolphins prefer warm, temperate waters and the deep edges of the Continental Shelf waters where prey is abundant. And as they follow their prey, the migrate. Scientists have had trouble studying Risso’s dolphins due to their preference for the pelagic zone. Pods have been seen to number from 3-30 up to super pods of hundreds or even thousands, all separated by age and sex. Nursery pods, juvenile pods and adult pods of Risso’s dolphins have all been observed.

Newborn Risso’s dolphins are born light grey, darkening as they become juveniles and then lightening as adults, with the accumulation of more white scarring. Each individual has a unique scarring pattern which can be used in identification, along with their unique dorsal fins. They also possess a distinctive white, anchor-shaped patch on their chest. Like other deep diving species, Risso’s dolphins have a bulbous head with no distinct beak. Their mouths slope upward to form what looks like a smile from a human point of view. The dorsal fin is tall and falcate, meaning hooked. Flippers are long and sickle-shaped.

The two recently born Risso’s calves still have their fetal folds. While growing and developing in the uterus of their mothers, the calves are in a curled position, resulting in distinctive lines being present when the calves are born. Fetal folds indicate that a calf is very young and still dependent on its mother for milk, a reliance lasting between one and two years. Like humans, dolphins grow slowly and need parental support and protection for a long time. 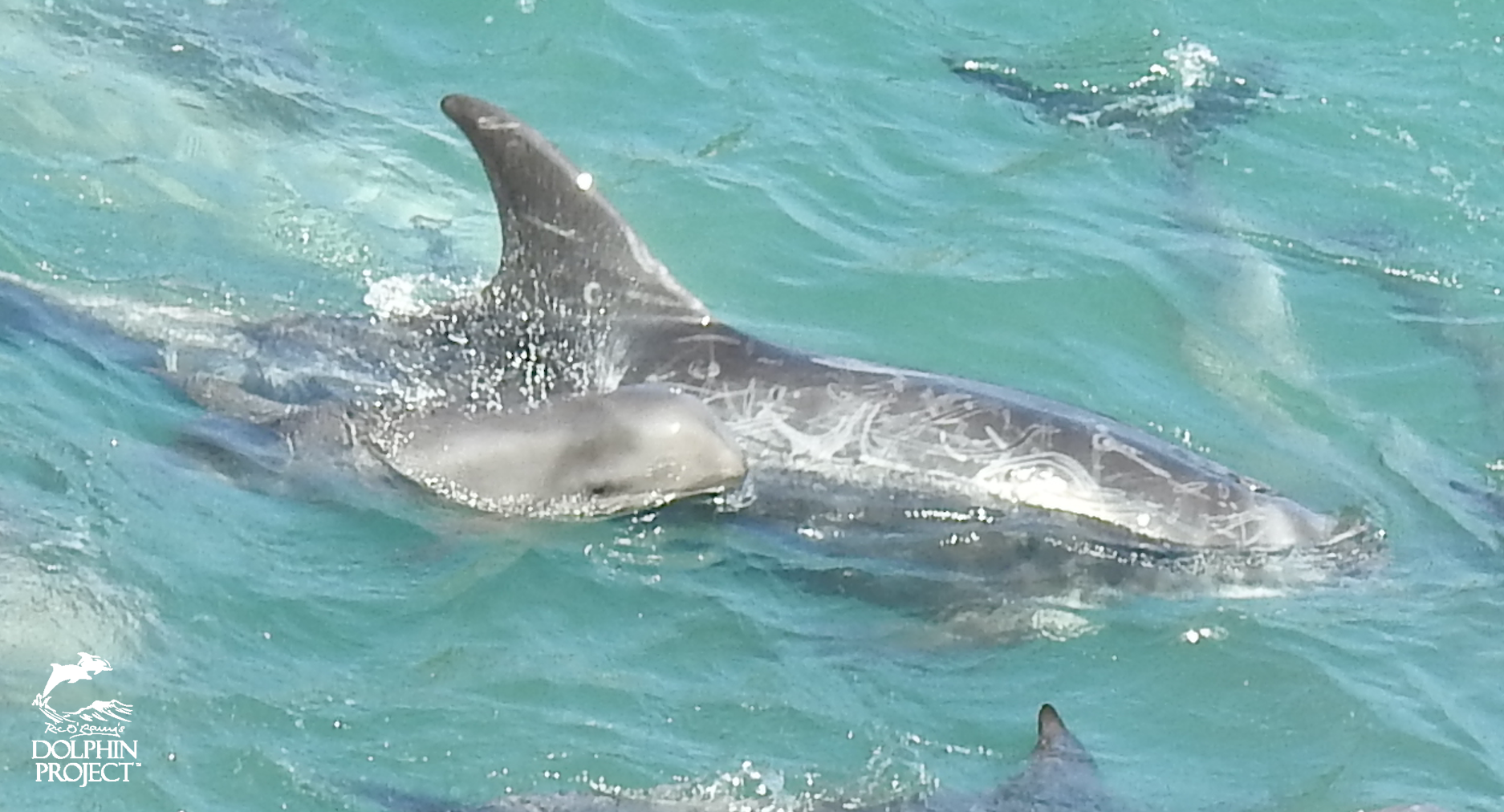 The two nursery pods, both in California and Japan, move closer to coastal waters. Scientists believe that nursery pods move to shallow water in order to minimize the time adult females need to spend hunting and reduce the young calves’ exposure to predators. This is a good strategy for the coast of California, but one that can lead to extreme danger in Japan.

The newborn Risso’s in the California nursery pod learns how to time its breaths, so it can properly swim. Jumping out of the water, it exercises its newfound freedom, prompting its mother and the other adult females to keep a closer eye on it. The other newborn in the Japanese nursery pod has similar experiences, in its quest to figure out what it means to be a Risso’s dolphin.

Activity has made both Risso’s hungry. Like all dolphins, Risso’s have evolved into stream-lined shapes. The mammary glands of the females are found within the mammary slits. In order to get to the teat, the young calves must pry open the mammary slit with their beaks. Next, a cone of sorts is formed with the tongue as it latches on to the teat, forming a water-tight seal. The females voluntarily contract muscles around their mammary glands and the calcium and nutrient rich milk is ejected into the mouths of the calves. No milk is lost in the water and no water gets into the milk. The calves will feed about four times a day, depending on when opportunities are presented. As the calves continue to grow, the composition of the milk will change, its nutritional value diminishing as the calves mature. Perhaps this is nature’s way of encouraging the young dolphins to transition to hunting, and consuming their own food.

As the nursery pods go through their daily routines, including resting, socializing, hunting and traveling, a strange sound is heard on both sides of the ocean. The roar of boat engines gets louder and louder as the pods are approached. The nursery pod on the California side of the Pacific provide entertainment and wonder for eager tourists, with boats maintaining a respectful distance. However, on the Japan side, the roar of engines only increases and along with it, loud banging sounds.

Being acoustically sensitive, these sounds are terrifying to the pod. The mothers gather their calves and elders together and begin to flee, swimming as fast as possible in the direction that leads away from the sounds. Adult and juvenile pods would dive deeply to escape, however the young calves cannot yet hold their breath for so long. Elders would also have a difficult time keeping up. With the pod committed to staying together, they slow down, ensuring everyone is accounted for. Every time the pod surfaces, the boats creating the wall of sound are waiting for them. They continue to swim away from the sound, however after being pursued for hours, the nursery pod is forced into a cove, and a net is dropped into the water from behind. 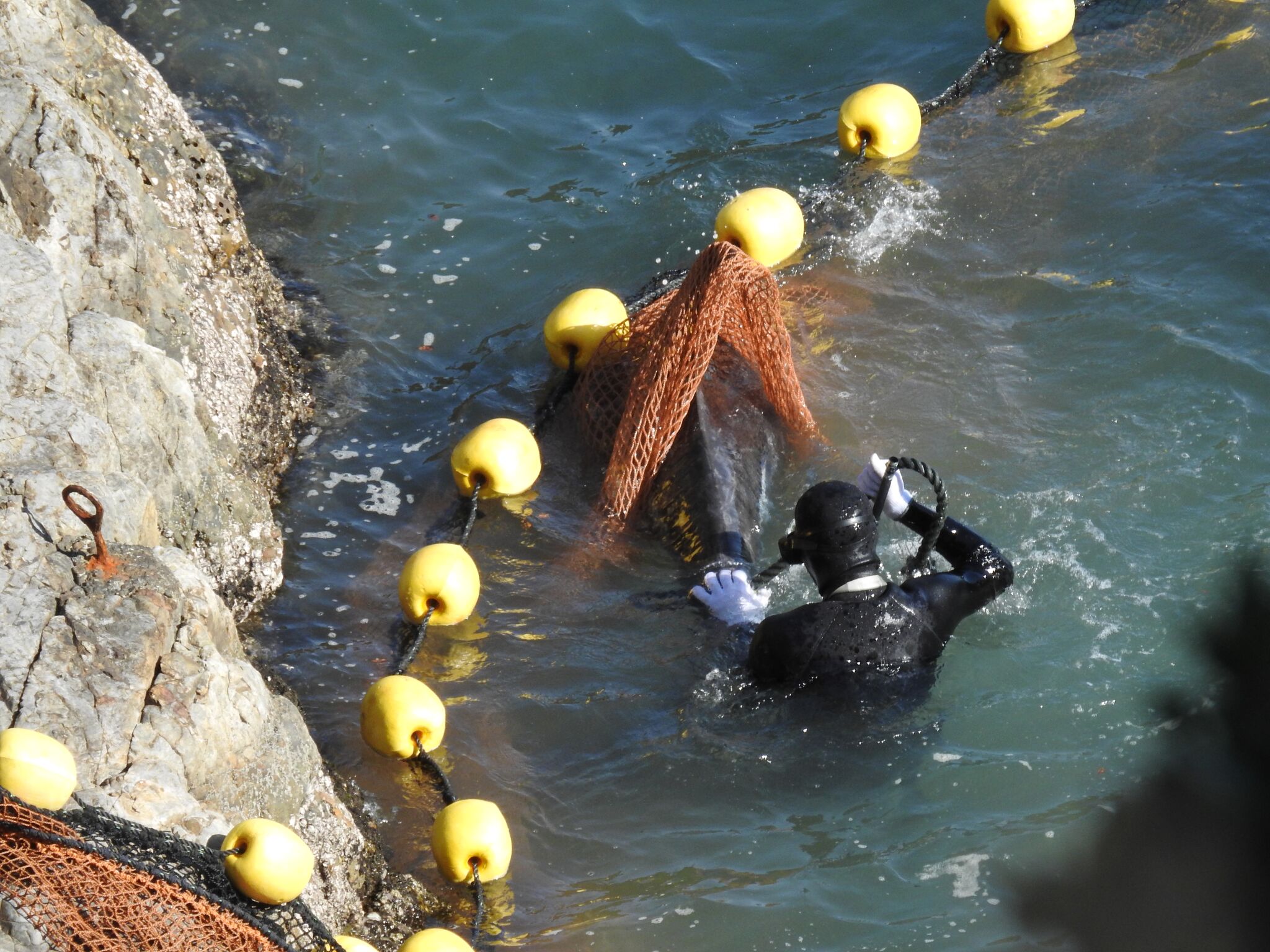 The pod, never having encountered a net, attempts to use echolocation to try to figure out what the net is. They swim tightly together, mothers and their calves, and elders beside one another. Soon, other boats come directly towards the dolphins, creating loud noises and lots of bubbles. The terrified Risso’s dolphins are forced closer and closer towards the shore. Humans try to separate the mother and calf pairs, including the newborn calf. Amidst loud and frightening sounds, its mother desperately tries to get back to her calf, pushing straight over the net. She quickly rejoins her panicked calf while all around her, other members of her pod struggle against the humans. Ropes are thrown out and tied around the flukes of the larger dolphins as they are pulled onto a beach. Other dolphins are wrestled into nets, pinned against the side of a boat and taken away, never to be seen again.

The sounds of terrified and dying Risso’s dolphins fill the cove as they thrash violently in the water. The scene is horrific, chaotic until finally….humans turn their attention, once again, to the young calf and its mother. And once again, they are forcibly separated, the calf wrestled into a sling that is secured to the side of a boat. It’s mother is forced under the tarps that hide the killing area on the beach.

The boat begins to move, carrying not one but two very young Risso’s calves. Once it reaches the open ocean, the slings are opened. The two Risso’s calves slide out of the slings and into the water, free, but alone. With the boat moving away, the two calves vocalize furiously, searching for any members of their family pod. But there are none. The calves are completely alone, hungry and frightened, and face a bleak future.

Meanwhile, back in the California coastal area of the Pacific Ocean, the boats have restarted their engines and are beginning to leave. As the sound of the boat engines fade away, the nursery pod begins to rest. Tomorrow, they will swim, socialize, hunt and travel. Mothers and calves will swim side by side in search of rich feeding areas. Perhaps the boats will come again, but they have nothing to fear. Their future is bright.

Treasured and loved in one area; brutalized and destroyed in another. Two completely different destinies determined simply by birthplace. Our wish is that all dolphins can swim wild and free, and through education and understanding, we need to mobilize and help protect those who cannot speak for themselves.