A Street to Call My Own 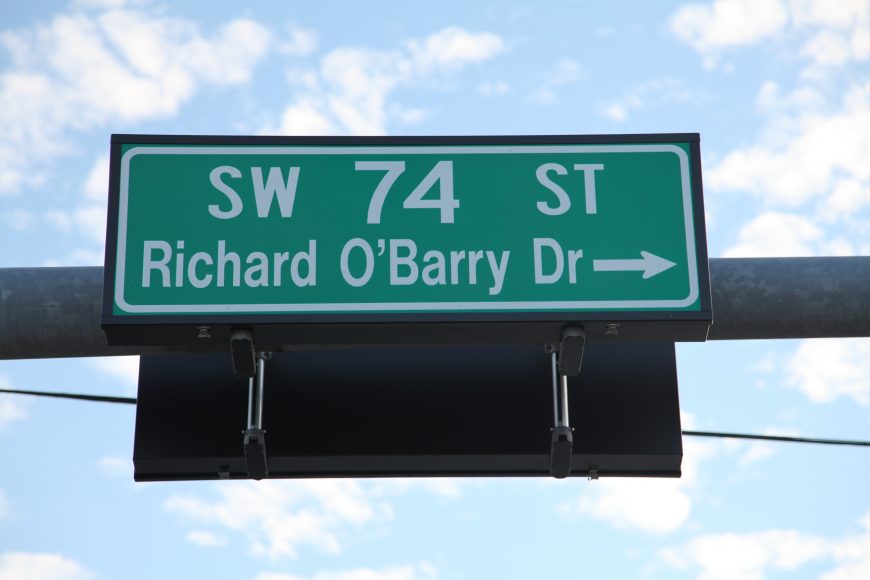 A Street to Call My Own

With the success of The Cove, this last year has been surreal. I’m used to beating down doors, not having red carpets rolled out in front of them.   So when South Miami City Commissioner Walter Harris told me a few months ago that the city wanted to name a street after me, I thought he surely must be joking.  I really kept expecting that phone call – “Sorry, we’ve made a horrible mistake.”

But it never came, and over the weekend Commissioner Harris and South Miami Mayor Phillip Stoddard designated SW 74th St. “Richard O’Barry Drive.” Both are the real deal when it comes to the environment.   Commissioner Harris has worked hard to preserve South Miami’s natural beauty, fighting big development and winning. Mayor Stoddard has a degree in Marine Biology, and has actually studied animal communication.  I can tell his heart is in the issue.

I’ve had many highs and lows over the last 40 years, and this is definitely a high.   My opinions have not always been popular, especially in a state like Florida, home to SeaWorld, the Miami Seaquarium and, over the years, more mom and pop dolphin parks than I can name.  I can’t thank the city enough for coming forward, not just for me, but for what it means for dolphins and other marine mammals.

It was also a kick to see some or our original Dolphin Project members from the 70s – people who have supported me tirelessly over the years.    I can’t thank them enough – they are my extended family.  Speaking of family, my son Lincoln surprised me by flying in from a remote Blood Dolphin$ shoot.

If you haven’t seen it yet, Animal Planet, a Discovery channel, will be re-airing Lincoln’s show Blood Dolphin$ this week – January 8th through the 16th.   The Solomon Island’s episodes are particularly important because they show a path forward for the Japan campaign.

You can see more pics from the street event here:

More than anything, I hope this all translates into awareness.  That some young kid will look at that sign, google Richard O’Barry, and get educated about the issue.  I hope it will also send a message to people that this is an important issue that deserves attention.  Because we still have much to do…Dolphins are still dying in the Cove, and the captive dolphin trade is still exploiting and abusing dolphins.  So we will need many more signs.  I’m personally looking forward to seeing one soon in Japanese!