A Mermaid on a Mission 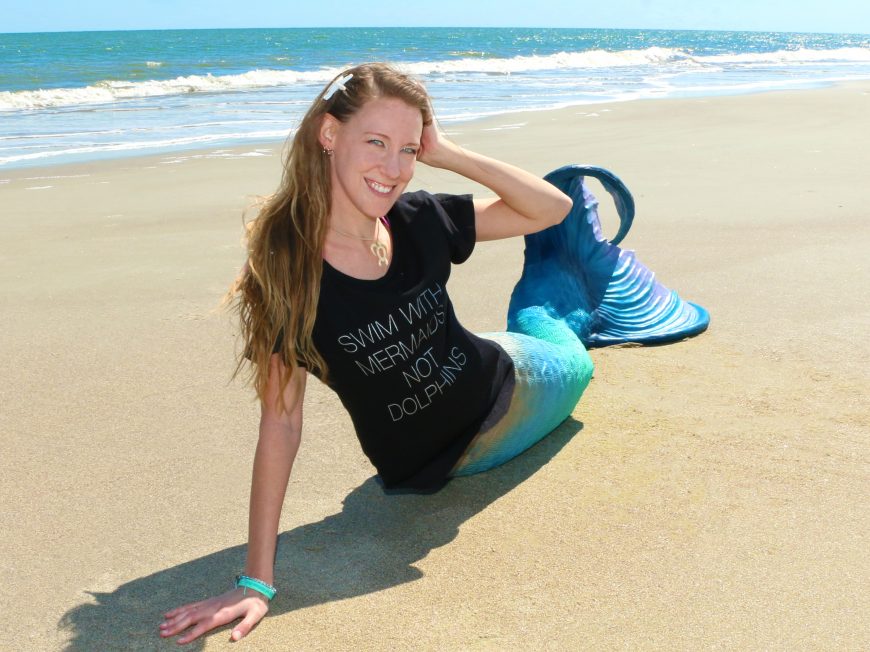 As a professional mermaid, it’s easy for people to assume that I’ve always been obsessed with mermaids, but the truth is that I never gave them much thought. My goal in life as long as I can remember was actually to work with dolphins. I was the child who brought a plush dolphin with her on her first day of preschool, and who looked up to Ric O’Barry, the trainer of Flipper. While in college I was accepted into a marine mammal training internship, which was my dream come true. I moved to an island in the Atlantic to begin my career as a dolphin trainer.

On my first day on the job, all I wanted to do was get in the water with those dolphins, but of course I had to go through the proper training first. My anticipation of what would be covered was very different than what was actually discussed in our first session. To my surprise, the training placed a primary focus on what we were and were not allowed to say to guests. For example, if a guest questioned any aspect of dolphin captivity and if the dolphins are happy, our answer was to be: “All of our dolphins love human interaction. In fact, they actually seek it out. They are very happy here.”

When it was finally my turn to lead an interaction program, I was teamed up with a four year-old dolphin named Lily. I was very nervous and my mind went completely blank; I couldn’t think of a single dolphin fact to tell the guests. Lily swam past me, then stopped and looked at me as if trying to figure out what was wrong. Without any instruction, she swam in front of the guests, stopping right in front of a young boy. She looked right at him, and made the most ridiculous sound I had ever heard a dolphin make. The guests laughed, and I took her cue to talk about how dolphins don’t have vocal chords. From that point on, I was almost always paired with Lily, and we were a great team! Through working with Lily I began to understand how intelligent dolphins really are. 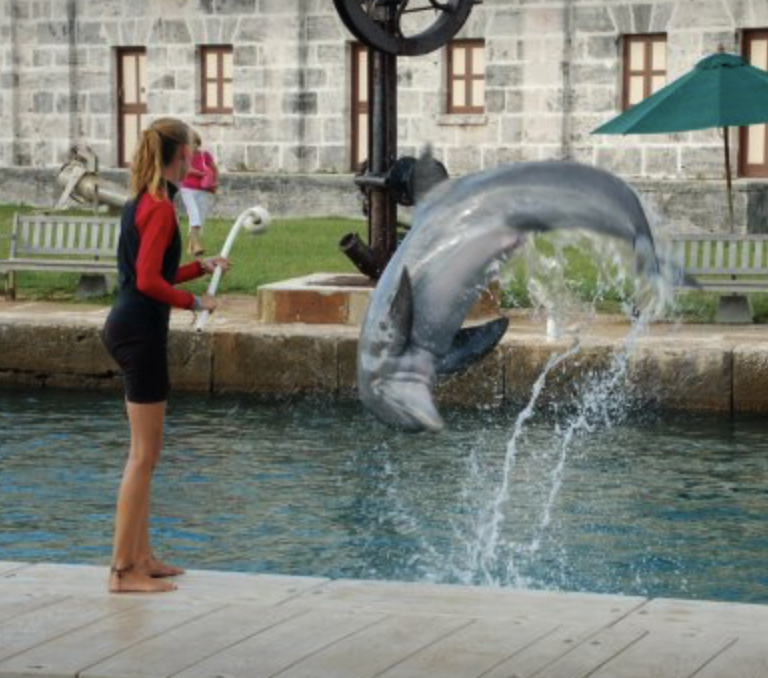 As time passed, my relationship with Lily grew, and I thought a lot about her situation. I would watch her swim around the pool in circles with the other dolphins; knowing how smart she was, I found it difficult to believe that she was really happy. She and the other dolphins would float on the water’s surface from time to time. I was trained on my first day to explain to guests that this behavior was “how they slept” because every breath they take is a conscious effort. The closer I became to Lily, the more obvious it became that they weren’t “sleeping” – they were literally bored out of their minds.

Towards the end of my internship, I couldn’t sleep. I stayed up at night thinking about Lily and her life in captivity. I could very easily lie to guests and make them believe that the dolphins were happy to be there, but I was having an incredibly difficult time lying to myself about the same thing. I found myself at a crossroads in my seemingly perfect road, wondering whether to abandon my lifelong dream.

Once again, Ric O’Barry was my inspiration. On my last day, I said goodbye to Lily, and I promised her I would do everything I could to get her out of that pool.

When I returned home from my internship, I found myself completely lost and began training dogs instead. While it was fun, it was not my passion. My passion was Lily. Two years after I left, Lily was moved with her sister to a different facility. Three years after that, Lily was moved yet again. Now her family is scattered across three separate facilities, and Lily is surrounded by dolphins she doesn’t know.

I was lucky enough to visit her seven years after we parted ways. This was the first time my partner had ever met her, and to him one dolphin looks like any other. However, when we visited Lily, he was able to pick her out right away – she was the dolphin who was staring at me intently and then began leaping out of the water with excitement. She remembered me! This leads me to think that the bond we had was real, and while it was a major plus that her interactions with me almost always led to food, I strongly believe she genuinely liked me.

I’ve never stopped thinking about my promise to Lily, and it is has become my life’s work. When my partner and I moved to Hilton Head, we started a mermaid tour business with the mission of connecting people to the issues that our oceans face, one of which is marine mammal captivity. We found that people like getting information about the ocean from mermaids!

My goal is to educate people about ocean conservation and to give Lily’s story a platform where she can be heard. You’ll find me swimming alongside wild dolphins and approaching the boat to talk to the passengers about how it’s much better to see mermaids and dolphins in the wild than in captivity. Once people understand this, they are less likely to purchase a ticket to a dolphin show or aquarium.

We also pass out flyers on the boat and encourage people to watch ‘The Cove’ documentary to learn more about captivity issues. Our hope is that people will share this information and help educate others, so that captivity will come to an end. We’ve just returned home from Singapore, where as a Mermaid Ambassador I was able to reach a new audience to bring awareness to the captive entertainment industry. With Lily as my inspiration, I will continue to share this message with a new generation, so that she and all dolphins will one day be free.

Help us be a voice for the dolphins!

Nina will be sharing more of her experiences in future posts.