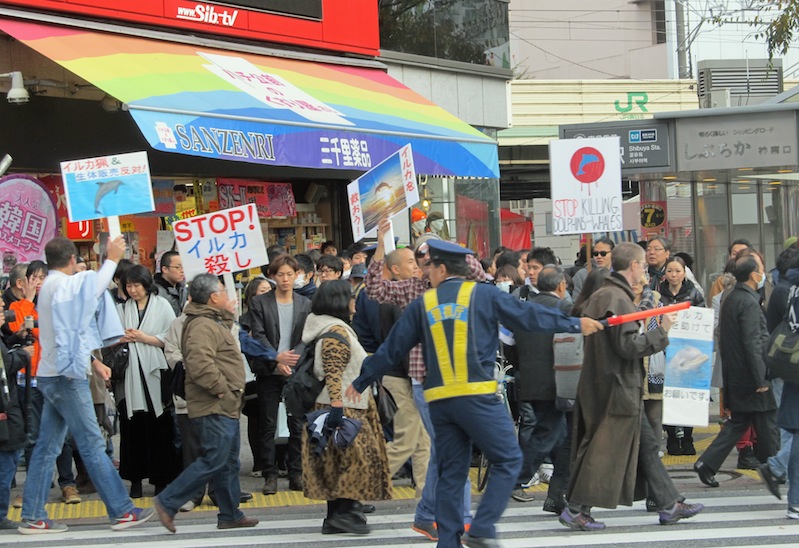 This past Saturday, something new and VERY significant happened in Tokyo.  A grassroots group of Japanese animal rights advocates staged a protest against the killing of dolphins and whales attracting 70 protesters, more than 40 of which were Japanese.

The Dolphin Project Team and I have been working towards this for many years, meeting and contacting Japanese people around the globe.

And now it has finally happened: A first Japanese protest against the dolphin hunts!

Most Japanese that we have talked to over the years oppose the hunts.  Yet, it is very hard for them to come out publicly against the dolphin and whale hunts.  The tradition in Japan is to not speak out on issues; you go with the flow.  There is no history of protests and demonstrations like there is in the West.  And the Japanese government and extremists in Japan actively discourage people from coming out against the hunts in a very threatening manner, while pouring out reams of documents and propaganda to claim the hunts are traditional, scientifically based, and required for the food needs of Japan.  They have even used false science to claim dolphins and whales are eating all the fish in the ocean, hence the decline in fisheries!

And, of course, in Japan no government official or dolphin killer ever talks about intelligence, morality, or the personhood of dolphins.

Indeed, about thirty extreme nationalists showed up to counter-demonstrate in Tokyo, shouting at the Japanese speaking out for the dolphins to – ironically — “go home.”  Some even spit on the pro-dolphin protesters, but fortunately the Tokyo police were there as an escort and kept the two groups from serious conflict.  Observers noted that the nationalists actually attracted more attention to the issue and made the pro-dolphin demonstrators look good.  The Japanese pro-dolphin demonstrators showed great courage in not backing down.

Satoshi Komiyama, a representative of the grassroots organization Action for Marine Mammals, helped organize the Tokyo event, and the organization also assisted with demonstrations in London, Sao Paulo, Vancouver, Canberra, and across the United States. I heard from Eri, a Japanese activist who helped lead the demonstration in Tokyo. She was pleased that it was “so very successful!”

It was held in the busy Shibuya Station crossing in Tokyo.  (If you recallThe Cove movie, at the end I am shown standing with the television screen on my chest in a busy intersection in Tokyo as people pass around me – that is Shibuya, where the demo was held, not by me, but by more than 40 Japanese!)  Eri says, “thousand of people watched over us.”  They just shouted louder as the extreme nationalists shouted.  It must have been quite a sight!

Our friend Yoav Ben-Shushan, who lives in Tokyo and worked as a Cove Monitor for us in Taiji earlier this year, attended the event and sent us these exclusive photographs.

Dolphin Project volunteer Cove Captain Sakura Araki happened to be in Europe, and attended the demonstration in London.

Here’s a lively YouTube clip of the action in London:

So, Japanese activists are joining us in Taiji on Sept. 1st, volunteering for the first time to be Cove Monitors, and now organizing their own demonstrations in Tokyo against the dolphin hunts.  (They also protested the bogus “scientific” whale hunts held in Antarctica and the North Pacific Ocean by the Japanese government.)

They need our continuing support so they can stand up to the powerful Japanese Fisheries Agency and its puppets in Japan.

Eri concluded by saying, “I was very moved today!”