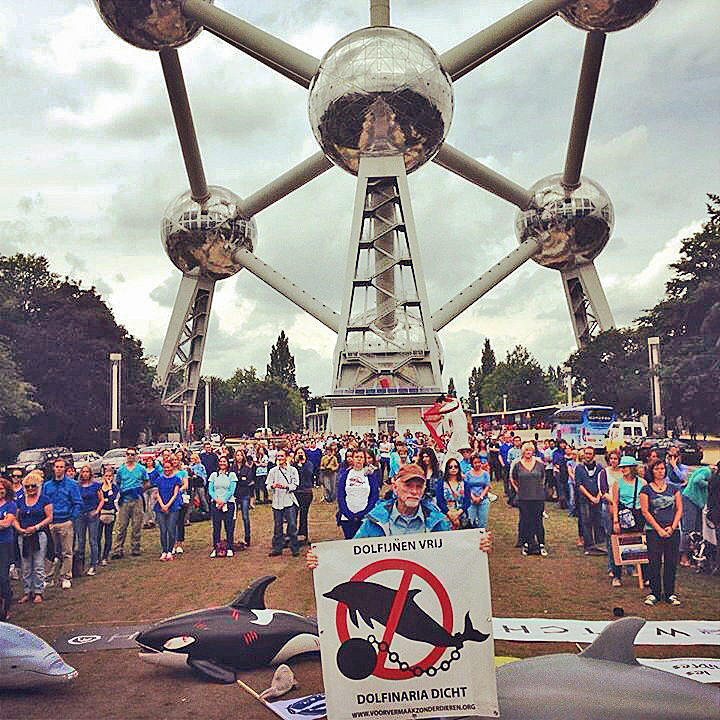 A huge crowd of 400 showed up to protest dolphinaria in Europe and urge the European Union, based in Brussels, to ban the import of dolphins and end captivity.

We’ve made some progress in shutting down some of Europe’s dolphinariums, but we are now hopeful that the EU will act to protect dolphins in all European nations.

As you can see from the photos, a lot of people care deeply about dolphins!

Says Annelies Mullens of BITE BACK: “The purpose in protesters forming the word FREE was to demonstrate that by working together, we can be powerful enough to close all dolphinaria in Europe”.

A big thanks to Annelies Mullens and Yvon Godefroid, organizers of the demo, and also to La Dolphin Connection and BITE BACK, the organizations that made this event possible. Thanks also to Maria Heidemann, Midori Takahashi, Astrid Dickopf, Sasha Alazy and all the wonderful people who worked hard in order to make this demo the success it was.

Next up: I am heading to Stockholm for a big demonstration there at the Kolmården Zoo on Saturday, July 5th.

Yes, it is tiring to be traveling so much, but being with all these great people to help dolphins is a huge energy boost. And we are seeing progress for dolphins!

Thanks to all our friends in Europe! Demonstrators in Brussels spell out “FREE” for dolphins on Saturday.

Noted Annelies Mullens of BITE BACK:  “These photos say it all: alone we are small, but together we will make the difference!!!  FREE dolphins.  Every single person who came to the demo helped to make this happen.  We made huge and powerfull statement today towards the dolphinaria -industry.  Working together in a team as we did today with people from so many countries will help to end dolphin captivity.  THANK YOU!”